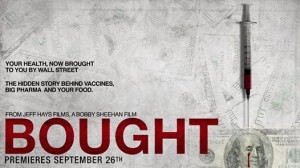 We often joke “Only in America”!  Our rates of obesity may be climbing faster than in any other country in the world, but generally we tend to follow the USA’s health problems.  Our health system may be better than theirs … but is it really?

Bought is a movie that tells of the hidden story behind vaccines, big-pharma and big-food.  Big money has gone into the making of this film, most of which has been raised by little people like you and me.  And there has been tremendous opposition in its making.  Is this yet another conspiracy theory?  I’m beginning to wish it was.   The sheer weight of evidence provided in the film at least demands that we need to ask more questions, take control of our own destiny.

I’ve seen a preview of some of the snippets and have personally met one of the producers.  I look forward to the film’s release on the 10th October.  You wont see it in the theaters.  I believe it will only be available on the internet, and at this stage it will be showing between 10 October 2014 and 21 November on Yekra.

You can pre-order your rental or purchase of the movie now at a discount using this link .